At HG Books, we believe that good writing is like clear chicken soup--it may not cure you of all your ills, but it sure feels good going down. Our readers deserve it.

The Making, Breaking, and Renewal of a Surgeon Scientist: A personal perspective of the physician crisis in America 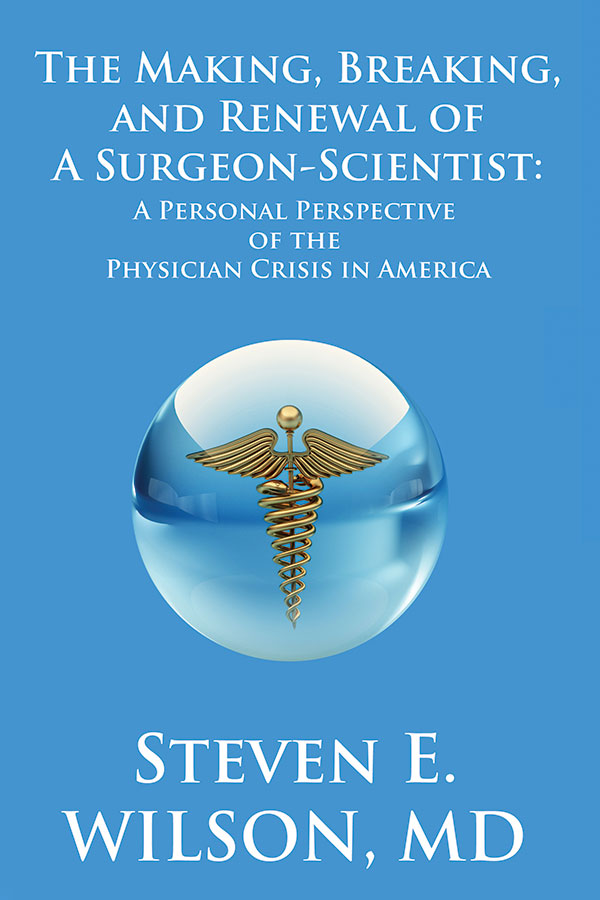 The Making, Breaking, and Renewal of a Surgeon-Scientist: A Personal Perspective of the Physician Crisis in America is an autobiographical narrative about how a middle-class youth endured personal turmoil and family crisis to achieve his lifelong goal of becoming a physician and rose to become one of the outstanding eye physician-scientists of his generation... only to be disheartened and disillusioned by the ongoing tainting of medicine by bureaucrats, bungling administrators, and federal prosecutors - including the tragic scapegoating of three physicians during the whistleblower-initiated federal Medicare/Medicaid fraud investigation at the University of Washington. The story is at once entertaining, informative, and poignant - providing a personal account accentuating why physicians and surgeons are fleeing medicine in droves and detailing what must be done to mend the cracks before the once great American medical system crumbles to pieces.

al-Qaida, the Taliban, and the Northern Alliance—history re­corded forever. These names con­jure images of rugged moun­tains, ancient cities, hardened Muja­heddin, a country rife with regional rivalries, and the eternal struggle between Tajik and Pashtun. They are indelibly recorded in history. Afghan­istan comes to life in this epic adventure of love, betrayal, and war. Young Tajik Ahmed Jan’s heroic journey begins in the Northern Alliance stronghold near Taloqan just a month prior to the al-Qaida 9/11 conspiracy. He is swept away by the chaos that soon engulfs the country before a chance discovery propels him to the forefront of the clash between civilizations. Pursued by both the CIA and al-Qaida, he struggles to save his people from obliteration and find the true meaning of life in a land where all seems lost.

Winter in Kandahar is a gripping 464 page epic is destined to be a classic in the genre of Lawrence of Arabia and The English Patient. The story highlights events that are shaping our world. It is both timely and enlightening. Here's what one enthralled reviewer said...

“I loved Winter in Kandahar. It’s a unique and compassionate exploration of this troubled land and a scientific thriller that dissects a new, sinister form of bioterror. The ending is powerful, ironic, and perfect.”
More reviews... 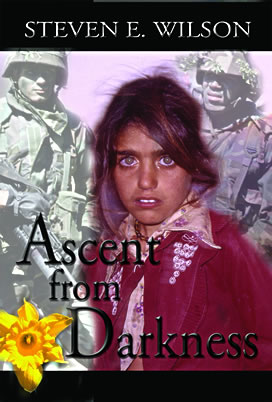 An international thriller of espionage, war, and love, interwoven with profound, world-changing current events. Reluctant CIA operative Stone Waverly is sent to hunt down weapons-grade plutonium stolen from a Ukrainian nuclear plant. The shadowy trail leads from Odessa to Cologne to Amsterdam to Damascus, as agents with terror links manage to evade an international dragnet. Tormented by his past and the betrayals of a fellow operative and those he loves most, Waverly is plunged into a mysterious and perilous world of intrigue and evil in Syria and war-torn Iraq. Everyone is suspect and nothing is as it seems, in a land where Islamic extremists determined to plunge civilization into darkness battle Special Forces, Kurds, and Arabs intent on restoring sanity, dignity, and hope to a world gone mad.

"An intense, action-packed thriller from cover to cover. Benjamin Franklin Award finalist Steven E. Wilson presents Ascent from Darkness, a thrilling novel set against a backdrop of war, espionage, and hot and cold international clashes. When reluctant CIA agent Stone Waverly is assigned to seek the weapons-grade plutonium stolen from a Ukrainian nuclear plant, his search takes him from Odessa to Cologne to Amsterdam to Damascus. A race against time to stop terror ensues as Waverly, haunted by the past betrayals of a fellow operative as well as those closest to him, navigates the intrigue and outright ruthlessness rampant in Syra and war-driven Iraq. An intense, action-packed thriller from cover to cover. Also highly recommended is Wilson's previous novel."

"Wilson captures the bitter realities and sweet flavors of the modern day professional soldier's experiences. In a rare combination of the stark beauty and emotional depths that exist in the struggles of war, Wilson takes us on a journey over emotional trails that haven't been traveled since Dr. Zhivago."

"A top CIA agent, with a mission impossible to find weapons-grade uranium in the heart of the Islamic world, becomes a real life "007" who sacrifices family for duty to country when he joins U.S. forces and Iraqi peasants alike in a quest to change the face of the middle east after the overthrow of the Butcher of Baghdad. Masterfully using known facts of the Iraq war, including where weapons of mass destruction may have been hidden and how Saddam Hussein was toppled, Wilson creates a rich fiction which takes you through Syria and Iraq in search of stolen Ukrainian uranium, which if not found, will almost certainly be used by terrorists. This thriller unfolds like a motion picture, complete with forbidden romance, desperate Special Forces operations, and a never-say-die love of country." 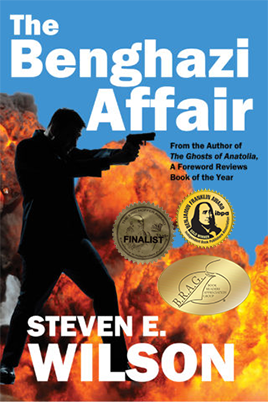 Retired CIA case officer extraordinaire, Stone Waverly, is contentedly caring for his motherless children and teaching precocious middle schoolers, when out of the blue, duty calls once again. Within hours, he finds himself leading a team of covert operators in treacherous revolutionary Benghazi during the Arab Spring. Battling Gaddafi loyalists, and purportedly allied jihadists, he surreptitiously hunts for a terrifying weapon before it can be unleashed on the US homeland. Can he prevail where nothing is as it seems, despite severe injury, unsettling events at home, captivity in a chamber of horrors, and betrayal by a compatriot? The odds are stacked against him and time is running out.

"The Benghazi Affair is an excellent read! Once again Steven E. Wilson blends the worlds of covert operations and intelligence, combining history, culture and action in a compelling thriller that could leap from today's headlines."

"In this third installment of the Stone Waverly Trilogy, readers meet up with the character they have come to respect in his classroom, leaning on that big metal teacher's desk and trying to bring clarity to a discussion with his students about 9/11. These are young boys looking up to him at St. Christopher's, and Stone is bringing all he can (instruction-wise and faith-wise) to a discussion commending the heroes and heroines who fought and continue to do so for a country that is "gifted" with the freedom to have these conversations in the first place. When he looks up as the class is ending, a woman he knows all too well is standing at his door. Her name is Marilyn Harrison and Stone already knows that this is not just a social call.

Stone was one of the best specialized skill officers this country has ever known. After the death of his beloved wife, he walked away from those fearful missions and turned his attention on teaching, raising his children (Anne and Mike), and hiring on a nanny who helps him keep things afloat. Stone struggles with not wanting to ever fight again versus his need to make sure that everything remains good for America so that his own children do not have to deal with war, death and destruction.

Harrison delivers her deal. If Stone takes on the mission, it will be the last time they ever ask him to do so. Stone is adamant about staying with his children and not upsetting their lives. After all, he's already kept under wraps the past life that he's had, choosing not to tell his kids about the harrowing situations he's been in and the friends he's lost in the process. But when Marilyn walks out, the night ahead is truly difficult. Stone knows in his heart that he will journey down this path once again if it means that he can grant more security to Anne and Mike.

It is time to find out the details, and Stone has no idea the amount of weight that will be put on his shoulders. Heading to CIA Headquarters the next day, he and Deputy Director Harrison talk about the inner-workings of what he is to do; the crew he is to work with; and the possibility that his most "special skills" might be called upon to eliminate some truly bad guys. He must head to an area where some of the most evil beings reign; splinter groups that are planning the demise of many, including those in the U.S.

His primary mission is to locate a Russian weapon that has disappeared. Thoughts are that it has fallen into the hands of a man who was in deep at one time with al-Qaeda until having a falling-out with the leadership and becoming a Libyan rebel leader. But... that is just one of many things he will have to face. Meeting his covert team, Stone flies into a world of pain, panic, distress and evil acts done on a daily basis in Gaddafi's realm. Not only will Stone find love, but he must also find a way to get free and stay alive when he finds himself under attack and abducted by villains. A true patriot, a loving dad, and a character readers are going to truly miss, Stone Waverly has been given an epic ending to his trilogy by his incredible creator, Steven E. Wilson. This is a series you most assuredly do not want to miss.

Quill says: They say: "All good things must come to an end." However, this author does have the ability to one day bring Stone back to the world... and here's hoping he will do so.


The Ghosts of Anatolia 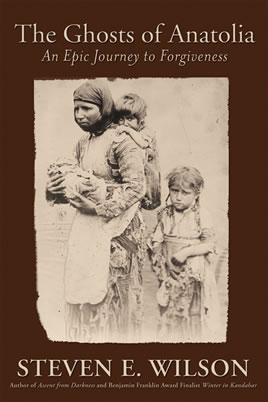 The Ghosts of Anatolia

The Ghosts of Anatolia is an epic tale of three families, one Armenian and two Turkish, inescapably entwined in a saga of tragedy, hope and reconciliation. Beginning in 1914, at the start of the The Great War, confident Ottoman forces suffered a devastating defeat at the hands of the Russians. Pursuing Russian forces drove deep into eastern Anatolia, and the ensuing conflagration, fanned by fear, mistrust and sedition, engulfed the Ottoman Empire. What happened there is contentiously debated, and to this day remains a festering sore of division. This compelling adventure novel brings these events poignantly to life.

"The Ghosts of Anatolia takes us on a realistic journey into a dark period of genocidal history. My own family endured the horrors on the road to Ras ul-Ain. After reading this gripping novel, I now feel as if I was with them."

"I was utterly transported to another place and time by Steven Wilson's Ghosts of Anatolia. The plot was engaging and the characters endearing. Wilson's generation and continent-spanning tale is full of love and hardship, war and family, history and mystery. In Ghosts of Anatolia, we follow the extraordinary and complicated character Sirak Kazerian, from his childhood in Anatolia at the dawning of the 20th century, through his education in Jerusalem, to his later life in America. Sirak learns that, though he has fled thousands of miles, he cannot escape his past-the "ghosts" of Anatolia emerge in ways no reader will expect. Wilson's story is a tapestry of contradictions: of boundary-crossing friendships amid religious conflict, of love and letting-go, of feud and forgiveness, and of the boundless power of faith to heal."

In 2003, we established a distinctive publishing company that cares about sustenance for the soul. Over time, we plan to bring you select and varied new works from budding authors with a knack for sublime expression.

Our feature book, a new novel from Steven E. Wilson

The Ghosts of Anatolia

Ascent From Darkness:
Look Behind the Cover

Winter in Kandahar:
Look Behind the Cover